If we want to understand how to pull greenhouse gases out of the atmosphere, we must inevitably turn our attention to the carbon sinks of the biosphere.

Carbon sinks are also referred to in geoscience as natural CO2 reservoirs. These are part of a natural carbon cycle of release and uptake of carbon dioxide and have influenced the Earth's climate since time immemorial. Within the carbon cycle, a distinction is made between carbon sinks and carbon sources. Humans use the sources in the form of fossil fuels such as oil, natural gas or coal. These have been, and unfortunately still are, the engine of human industrial advancement. Sinks, on the other hand, are seen as having significant potential in the fight against global warming and mitigation of climate change. If their natural balance is disturbed because of man-made climate change, their systems tip into disequilibrium and ecosystems are irretrievably lost.

A look at a selection of carbon sinks:

Terrestrial ecosystems, or land ecosystems, play an important role in the fight against climate change. 30% of man-made CO2 emissions can be absorbed by them. Vegetation plays a key role here through its photosynthetic capacity: forests absorb carbon dioxide directly from the air for their growth and store carbon in biomass, dead wood and mineral soil.

There are diverse research results on the carbon sequestration of trees, but in fact general statements are often not possible due to the structures and characteristics of forests that have to be differentiated. How much CO2 a tree can absorb within its lifetime depends on many factors, e.g. the tree species, the age of the tree, its wood density, leaf mass, root mass and also its growth rate. But above all, site factors also limit its ability to sequester CO2 from the air or soil: These include, for example, soil quality, climate, water supply and human impact quite directly.

For this reason, we have calculated an average value of 500 kg of CO2 that a tree stores during its lifetime, based on information from the United Nation Framework for Climate Change Convention (UNFCCC) and more than 70 studies we have evaluated ourselves.

In addition to marshes, floodplains, and wet meadows, bogs also fall into the category of wetlands. Although peatlands make up only about 3% of land surfaces, they are still significant carbon sinks. Globally, peatlands store 400-500 gigatons of carbon. This in turn is 26-44% of the total carbon sequestered in soil. Peatlands are referred to as the "kidneys of the landscape" because, in addition to absorbing CO2, they also filter groundwater, act like sponges, and thus form an important part of flood protection. Peatlands have been growing continuously since the last ice age 12,000 years ago.

The carbon is in the peat: Peatlands are unique ecosystems for countless species. The formation of peat plays a key role here: when plants die, they do not decompose completely due to the wet conditions. As a result, peat develops, which stores carbon. Peat cutting by human hands therefore has dramatic consequences: peatlands are drained and the peat stolen, the natural stores are destroyed and the climate-damaging CO2 is released into the atmosphere along with other greenhouse gases. Today, only about 5% of the peatlands found in Germany are still in a natural state.

If we do not protect the moors, they will develop from a carbon sink to a source in the worst case. Global warming causes bacteria and microorganisms to increase the mineralization of organic materials in the bog soil. Whether the greenhouse gases released by this process are then released into the atmosphere depends on the level of the water table.

The most effective way to protect peatlands is to declare them designated nature reserves. The mostly very costly renaturation processes aim at the rewetting of drained areas. To date, Naturefund has already been able to purchase approximately 120,00 m2 of peatland and secure it permanently for nature. But the protection of further areas is urgently needed.

Grasslands are oases of biological biodiversity. About 40% of the world's land area is grasslands - more area than forests occupy at 30%. However, grasslands are often ignored in climate change issues and their condition is considered critical because three-quarters of them are used for agriculture and, as a result, must be classified as "degraded." In specific parts of the world, the level of land degradation is as high as 60% (Brazil) and as high as 90% in Europe. Excessive use of fertilizers, overgrazing, soil erosion and cleared monoculture steppes pollute groundwater and lead to biodiversity depletion.

Underestimated sinks: Carbon sequestration in grasslands and also agricultural land refers to both above-ground and below-ground biomass. Soils have a separate role to play here. Above-ground plants release sequestered CO2 after death or harvest, while soil is the more constant sink. The first soil condition survey in 2018 were able to show that about 2.5 billion tons of organic carbon is stored in the first meters of our native fields. By comparison, natural grassland stores on average even twice as much carbon as arable soils.

The humus content is significant for the absorption of CO2 in soils. The build-up of 0.1 percent humus per hectare corresponds to a binding of three to six tons of CO2, depending on the soil type. On average, a full 8% of humus is found in grassland areas, and thus these areas bind more carbon than the soil under forests. So far, far too little attention has been paid to maintaining the health of our native soils.

Nature conservation projects are explicitly called upon to promote the humus content of soils. However, so far there is no concrete recommendation to support these also by so-called "humus certificates", or CO2 -emission certificates. More than 30 organizations and individuals from environmental and climate protection have decided in an open position paper 2021 against this instrument for compensation purposes. The strongest reason is the non-permanence of carbon sequestration. The humus content in the soil has too strong a natural and human-induced dynamic for such certification. Thus, a certification as a long-term climate benefit is not possible so far under the current consensus on research statuses. 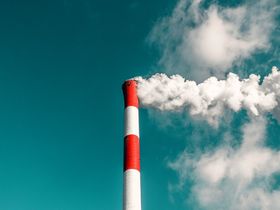 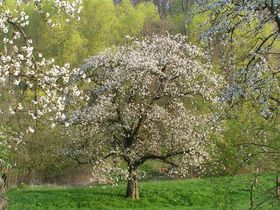 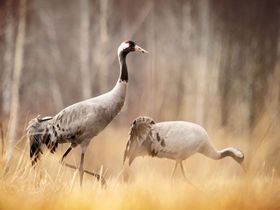