The grassland ecosystem and its importance for nature

Grassland, i.e. meadows and pastures, are immensely important components of our cultural landscapes. Not only do they serve to preserve biodiversity, they can also contribute to climate and soil protection.

Grassland is agricultural land on which predominantly grasses grow and whose biomass is used by grazing or mowing. In general, it can be said: Grassland consists of meadows and pastures. One third of the agriculturally used area in Germany is permanent grassland - i.e. meadows and pastures that have not been used as arable land for more than 5 years. In our latitudes, the preservation of grassland is always linked to its use. Without human intervention, the areas would otherwise gradually be colonised by bushes and trees and then turn into forest. The future and maintenance of grassland is therefore the responsibility of agriculture.

One of the reasons why grassland should be preserved at all costs is its important ecosystem functions. If not used too intensively, it serves soil protection and soil fertility, the protection of clean drinking water and climate protection through the storage of CO2 in the soil, the retention of water in the landscape, provides biological plant protection through beneficial insects and has diverse recreational functions for the population. Grassland therefore represents a valuable component of the agricultural landscape.

Since the beginning of the 1990s, the proportion of grassland in Germany has been declining sharply. While in 1991 more than 5.3 million hectares or 31.10 % of the utilised area was still cultivated as permanent grassland, in 2021 it was only about 4.7 million hectares and thus 28.50 % proportionately. There are many reasons for the decline in grassland, the main ones being

With the decline of grassland, biodiversity in agriculture is also continuously decreasing.

Grassland ecosystem: A hotspot of biodiversity

No other part of the world has such a high diversity of cultivated grassland ecosystems as Central Europe. These are among the most species-rich biotopes in Europe. This is also evident in Germany: more than half of all animal and plant species observed in Germany occur on grassland sites. More than 1,000 plant species are referred to as grassland species in the narrower sense, i.e. they grow predominantly or exclusively on grassland sites. The grassland ecosystem is therefore of immense importance for species protection and conservation. This is because grassland, with its variety of structures and different flowering periods, forms diverse habitats for mammals, insects and small organisms with close interactions between flora and fauna. On average, 8-10 animal species are found per plant species. Accordingly, a large number of animal species occur on extensively used, healthy grassland.

Extensively used pastures in particular also have a great species richness: Up to 60 plant species per square metre can occur here. The active dispersal of seeds by grazing animals in their fur or faeces has a positive effect on the number of species. Microhabitats created by footprints or wallowing also ensure a higher structural and species diversity here. Grazing management in particular has a decisive influence on biodiversity. In other words, what is the grazing period and duration, how high is the stocking rate, the duration of the regeneration phases and the number of rotations? All this can have a significant influence on the flora and thus also the fauna on a pasture. Intensive grazing with high stocking rates, for example, has limitations for biodiversity: only a few species manage to survive due to the heavy eating of the grass. 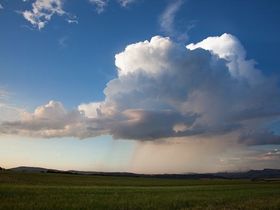