Biodiversity in the form of diverse flora and fauna: one of the positive effects of using DAF in the home garden.

Biodiversity is the engine of our ecosystems - this was shown by scientists from the Senckenberg Society for Nature Research and the University of Würzburg. Thus, the higher the biodiversity in our ecosystems, the better they function.

Dynamic agroforestry plays a major role in promoting biodiversity, especially through the principle of diversity: the more diverse a system in the DAF, the more stable and healthy it usually is. For allotment gardeners, this means fewer crop failures, richer yields and less use of plant protection products. DAF plots in gardens have significantly higher biodiversity, both in terms of plant system, insect diversity and organisms in the soil.

There are an estimated four to six million species of insects on earth, which are the cornerstone of almost all ecosystems on land. Bees, dragonflies and butterflies distribute pollen and thus ensure the survival of numerous plant species. Beetles, maggots and co. help decompose carcasses or dead plants, while flies and crickets are important food sources for larger animals.

But insects are often specialised on certain plant species, their flight radius is limited. In our currently largely cleared landscape with low biodiversity, insects therefore find less and less habitat. The food supply is also becoming increasingly limited and at the same time meadow flowers and herbs are disappearing for lack of pollinators. As a result, insects continue to die off. The effects of insect mortality are felt by the entire ecosystem. Our ecosystems are extremely complex, with many factors influencing each other. For example, plant debris provides the food base for many soil organisms. These, in turn, feed spiders and insects, which are the food source for a large number of bird species. As a result of the decline in insects, the bird population is also declining.

Protected and species-rich biotopes such as DAF areas can help animals to survive - both insects and birds. By designing your garden according to the principles of Dynamic Agroforestry, you can help to give our wildlife more habitat and vital plant diversity again! The most important principles in DAF are diversity and density of planting. This creates a wide range of food, various flowering areas and retreats for a wide variety of species.

According to the Red List of Soil Organisms, the decline in biodiversity that is already well known for insects is also evident in the soil. Mineral fertilisers, synthetic pesticides and other substance inputs accumulate in the soil and damage the organisms that live and work there. Most of these species are very small, but at the same time there are many of them - in a handful of fertile arable soil there are more soil organisms than there are people on earth.

The decline of these organisms is problematic, as they contribute to plant health, regulate the water balance and create conditions for fertile soil. This is also where Dynamic Agroforestry comes in: Through the dense planting of the soil, the synergies of plants, the pruning of plants and the distribution of biomass on the soil, the soil is supplied with nutrients in the long term. The result is a healthy soil that does not require the use of fertilisers and still provides a rich harvest for the gardeners. A win-win situation for gardeners and nature!

Overview: My own gardenNext article: Advantages 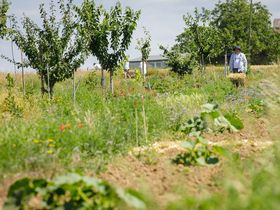