What does the CO2 equivalent mean?

A variety of greenhouse gases have an effect on the greenhouse effect, but not every one of these gases has the same intensity of effect on climate change.

About the unit CO2e

An index, compiled by an expert commission of the "Intergovernmental Panel on Climate Change" of the United Nations (IPCC), is intended to remedy the general understanding of greenhouse gas equivalents. For this purpose, the so-called "global warming potential" was surveyed. This index indicates the relationship between a greenhouse gas and the effect of carbon dioxide on global warming within a defined period of time. Often, time spans of a hundred years are considered here. It is therefore a collected unit of measurement that gives a standardized indication of the climate impact of various gases. Greenhouse gas emissions are converted into CO2 equivalents with the unit CO2e.

It's all about the greenhouse gas ratio

Most greenhouse gases are present in the atmosphere in varying amounts and even usually at a much lower level than CO2, but still have a greater effect on global warming. Here are three examples:

Methane : Has about 21 times the warming effect in its abundance compared to carbon dioxide. In spite of smaller occurrence it is involved thus around a multiple more strongly in the greenhouse effect. It is produced primarily in the livestock sector, in large amounts of rice cultivation in agriculture, or escapes when permafrost soils thaw.

Nitrous oxide: Has about 310 times the effect with its warming potential and escapes mainly when soils are overfertilized in agriculture.

Hydrofluorocarbons: (HFCs) are found primarily in refrigerants, such as those used in refrigerators. They are banned today and for good reason: their CO2 equivalent can have a value of several thousand.

Carbon dioxide is the leading element in the indexing, because of all greenhouse gases it has the greatest effect on global warming due to its proportionally large occurrence. The greenhouse effect briefly explained: Sunlight is converted into thermal radiation by the atmosphere. Greenhouse gases prevent the necessary back radiation into the universe and the atmosphere heats up. If the ratio of irradiation to back radiation is in balance, there is an average temperature of +15 degrees Celsius on Earth, which is what makes life possible in the first place. If the proportion of greenhouse gases increases too much, the necessary amount of heat can no longer be radiated back and the atmosphere heats up. In the worst case, climate-stabilizing ecosystems are thrown out of their natural and synergetic balance. For more in-depth content, see our Climate Facts chapter.

This is how compensation makes sense

The CO2 equivalent index therefore helps to calculate the emissions burden, brings the various greenhouse gases into a comparable ratio and thus enables targeted compensation. A simple example: A round-trip flight to Indonesia (Frankfurt am Main Airport, Frankfurt - Ngurah Rai (Bali) International Airport, Denpasar) causes around 8.8 metric tons of CO2 equivalents for a single person. The CO2 calculator, which uses data from the German Federal Ministry for the Environment, Nature Conservation and Nuclear Safety (BMU), helps with the calculation and thus takes into account all the effects of air traffic on the climate. In addition to the data for air traffic, the BMU also provides emissions data for homes, cars or food.

The CO2 calculator of the Blue Planet Certificate can be used to calculate even deeper life and economic areas of human activity in the form of CO2 equivalents. Here, for example, precise data for individual logistics processes, event areas or canteen details can be included in the very personal CO2 footprint and the exact individual CO2 footprint becomes clear. 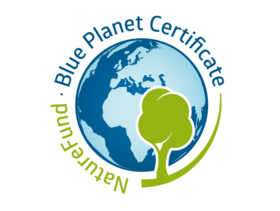 To the climate certificate

You can find more information about our climate certificate here... more