Just as nature is complex in its interplay, the cultivation method of dynamic agroforestry does not always present a uniform picture. Depending on the location and the conditions of the local ecosystem, the structure of the cultivation method may also change. What always remains is the principle of "contact instead of control" and thus the use of naturally occurring synergies in the respective ecosystem. The following examples show the different ways in which the innovative cultivation method can be used.

In countries of the global south, where the majority of the population still lives from agriculture, this is often practised in the form of monoculture. The consequences of this are serious: cultivation in monoculture quickly removes all nutrients from the fertile top layer of soil, which is often only a few millimetres thick in local forests, within a few years. In addition, soil erosion caused by heavy rain and wind often washes away the fertile topsoil in a very short time. Often the soil is so depleted after only 2 to 3 years that nothing can grow on it. As a result, forests are burnt down or cut down in order to obtain fertile soil and thus be able to generate agricultural yields that feed farming families. At the same time, erosion, heavy precipitation, drought and heat waves continue to increase due to the progressive destruction of intact ecosystems. Soil yields are becoming less and less successful and forests are being destroyed at an ever faster rate.

Dynamic agroforestry in smallholder structures can help break this cycle. Unlike monoculture farming, many different species grow together on a Dynamic Agroforestry plot. From fruits, vegetables and shrubs to fast-growing woody plants that can be used as firewood and native tree species that can be used for reforestation. Species-rich edible forests can thus be established in rural tropical regions, preventing further destruction of forests. The keyword here is always: diversity instead of monoculture! The higher the diversity in an agroforestry system, the more it resembles a species-rich natural forest.

The advantage: Unlike monoculture cultivation, the soils in dynamic agroforestry remain fertile in the long term. Based on the natural principles of nature, soils in agroforestry store water and nutrients over the long term. Through the dense cultivation of agricultural and forest plants on one and the same area and the consequent soil cover, the soil builds up humus and thus stores CO2. By planting trees and growing food on the same plot, erosion of the fertile soil by wind or water can also be significantly reduced. In addition, every tree planted makes an active contribution to climate protection. The result is a high-yield harvest of various species that lasts for decades and can be used for self-sufficiency as well as sold on markets. In addition to securing food, the farmers can also earn a higher income. In addition, the pressure on still existing primary forests decreases, the farmers learn after a short time to appreciate the value of trees both for their own cultivation and for the nature and animals in the immediate vicinity. The farmers become direct forest protectors by means of the sustainable cultivation method.

Today's form of agriculture is characterised by food cultivation on a large scale and thus in monoculture. Fields hundreds of metres long, on which no flowers, bushes, shrubs or trees grow, and thus no food or shelter for animals, are commonplace. What follows from this has already been sufficiently proven by science: Species richness in both fields and surrounding areas is rapidly declining. Resource-wasting industrial agriculture is also a contributor to extreme climatic events that affect food production worldwide and make it necessary to use industrial products such as artificial fertilisers and pesticides in agriculture.

The versatile sustainable cultivation method Dynamic Agroforestry can also offer a solution to this problem. By planting a Dynamic Agroforestry row on an agriculturally used area, more space can be given to nature. Long fields without any natural growth are a thing of the past. Another difference to monoculture cultivation is the soil: In industrial agriculture compacted by large machines, nutrient-poor, dry and saturated with pesticides, the soil in dynamic agroforestry is fertile and binds CO2 due to the continuous cover and the resulting humus. Plants grown in fields with an agroforestry row have a better microclimate, higher drought tolerance, lower pest pressure and fewer plant diseases than plants grown in monoculture. In addition, trees protect the soil from erosion.

In times of climate change and the ongoing loss of biodiversity, nature conservation should not only take place in forests or in the countryside. Establishing or maintaining greenery in urban habitats is also important - especially since more and more people are moving into cities, sealing is the order of the day and more and more biotopes in the countryside are being lost due to intensive agriculture. Our news article reports, for example, on the increased agricultural deserts that offer too few retreats for insects.

One way to preserve nature in the city and create urban biotopes is to use dynamic agroforestry. Districts, municipalities and cities can take measures for active nature conservation and the preservation of biodiversity by planting dynamic agroforestry. In the process, nature benefits through the creation of a multitude of tiny habitats and the planting of a wide variety of species. The aim is to create more animal- and plant-friendly habitats and at the same time to promote urban greenery for the recreation of the population. Parks and gardens, cemeteries and courtyards can be consciously designed close to nature with Dynamic Agroforestry, thus advancing nature conservation.

Here you can find out more about the dynamic agroforestry areas implemented by Naturefund in municipalities and districts. 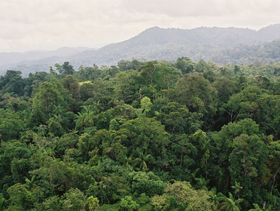